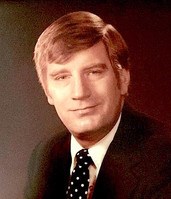 Jack Ritchie McCurdy
Jack Ritchie McCurdy, of Elmhurst, IL, passed away peacefully at the age of 87 surrounded by his loving family and wife of 66 years, Joanne McCurdy, née Kutsus. Jack was a devoted father to Michael and Michelle; proud grandfather of Jake, Rose, Haley and the late Brendan; and dear brother of Mary Jane McKearney and the late Walter McCurdy.
Jack graduated in 1955 from Bradley University as a member of the Sigma Nu Fraternity before his career as a leader at Dictaphone Pitney Bowes Corporation in Chicago, IL. As a member of the US Army's 8th Infantry, Jack served his country honorably during a tour of duty in Germany. A man of strong faith, Jack was a longtime member of Christ Church in Oak Brook, IL. The only thing bigger than Jack's size 16 feet was his heart, especially in the presence of animals.
Jack's life was filled with traveling and adventures, and he spent his retirement with family in Door County, WI, or exploring the world on his own and with friends. Jack could be found walking across England coast to coast with Country Walkers, living with Eskimos in Alaska, swimming in the Great Barrier Reef in Australia, completing Astronaut Training Camp, visiting a US outpost in Antarctica, repeatedly climbing the Swiss Alps, or traveling to places like Russia, France, Italy, Scandinavia, the US deserts and the Rocky Mountains. Jack would want us to honor his memory by enjoying every day as he did and remembering to "control the controllables."
In lieu of flowers, memorial contributions may be made to The Elmhurst Walk-In Ministry, 125 West Church Street, Elmhurst, IL 60126. Arrangements handled by Gibbons Funeral Home, 630-832-0018 or www.gibbonsfuneralhome.com.

To plant trees in memory, please visit our Sympathy Store.
Published by Suburban Life Publications from Apr. 26 to Apr. 30, 2021.
MEMORIAL EVENTS
No memorial events are currently scheduled.
To offer your sympathy during this difficult time, you can now have memorial trees planted in a National Forest in memory of your loved one.
Funeral services provided by:
Gibbons Funeral Home
GUEST BOOK
Sponsored by Gibbons Funeral Home.
3 Entries
God bless you, Uncle Jack. I will miss your dry wit and booming voice. I just wanted to add that Uncle Jack was a huge flirt around babies and small children. Much love, Alison
Alison Kindig
April 29, 2021
It is hard to explain the effects on one's life that other people have on them. I still recall Jack McCurdy stories with family and will never forget how he helped me through a very difficult time when my father was ill. I consider Jack my mentor and my soul has an empty hole in it today. God Bless.
Ed Banker
April 26, 2021
Offering our deepest condolences during this difficult time.
The Gibbons Family
April 26, 2021