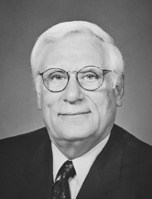 BORN
1929
DIED
2021
ABOUT
Lyons Township High School
James R. Stocker
James R. Stocker, age 92, of Middleton, passed away peacefully on Thursday, August 12, 2021 at Agrace Hospice and Palliative Care Center in Janesville, WI. Jim was born in Hinsdale, Illinois in 1929; the son of H. Edwin, Sr. and Berta (Herzog) Stocker. Jim graduated from Lyons Township High School in 1948 and attended Grinnell College before honorably serving in the United States Army during the Korean War. After the war, he completed his studies at the University of Illinois where he majored in Business Administration. He married Joyce (Holwick) Stocker in 1962 at the First Congregational Church of Western Springs and they recently celebrated 59 years of marriage. He was a near-lifelong resident of Western Springs, IL until his move to Middleton in 2020. Following college, Jim joined his father and his brothers at Stocker Hinge Manufacturing Co. in Brookfield, IL until his retirement in 2004. Jim also served as a volunteer firefighter in Western Springs and was a longtime member of the Rotary Club. Jim provided over thirty years of dedicated leadership to the sport of competitive swimming. He was Meet Director of the YMCA National Swimming and Diving Championships from 1971 to 1986, during which time the meet grew to be one of the largest in the country. Jim was a member of the U.S. Olympic Swimming Committee for eight years, serving as Women's Meet Manager for the 1972 Olympic swimming trials and as Men's Meet Manager for the 1976 Olympic swimming trials. He loved the Northwoods of Wisconsin where he and Joyce have had a second home for 50 years. As a youth, he attended Camp Manito-Wish YMCA in Boulder Junction, WI. A Camp Manito-Wish board member from 1987 to 2007, Jim served as Board President from 1995 to 1996.
Jim is survived by his wife, Joyce Stocker; children: Brian (Beth) Stocker, Karen Stocker, and Cindy Stocker; grandson, Andrew Stocker; brother, Bob (Nan) Stocker; and many extended family members and friends. He is preceded in death by his parents and his brothers: Ed Stocker and Jack Stocker.
A private gathering of family and friends will be held on later date. In lieu of flowers, donations may be made to Agrace Hospice or Camp Manito-Wish YMCA. SCHNEIDER FUNERAL HOME & CREMATORY is assisting the family. For online condolences and guestbook, please visit: www.schneiderfuneraldirectors.com
Published by Suburban Life Publications from Aug. 16 to Aug. 20, 2021.
To plant trees in memory, please visit the Sympathy Store.
MEMORIAL EVENTS
To offer your sympathy during this difficult time, you can now have memorial trees planted in a National Forest in memory of your loved one.
MAKE A DONATION
MEMORIES & CONDOLENCES
0 Entries
Be the first to post a memory or condolences.