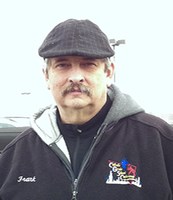 Francis 'Frank' Volpe
Francis "Frank" Volpe, 67, loving husband of Barbara Volpe; devoted father of Joseph Volpe and father-in-law of Casey Volpe; beloved grandfather of Oliver Francis Volpe; dear son of the late Joan and Joseph Volpe; adored brother of JoAnn Volpe and Alyce Sosnowski and brother in-law of John Sosnowski; fond uncle of Molly Sosnowski, Marc Sosnowski, and more nieces, great nieces and nephews, and cousins. Frank generously volunteered for nearly 30 years as a youth coach, most notably as a legendary football coach for St. Mary's in Riverside, IL. Under Frank's leadership, his teams won 9 league championships, and during his finest season, the team went undefeated without allowing a single point. Additionally, Frank spent several years coaching football at Riverside-Brookfield High School and St Joseph's High School. Frank was also a long-time board member for the Catholic Grade School Conference of Chicagoland, where he was honored as Coach of the Year in 1999. The CGSC later annually awarded a plaque named after him to the junior varsity football league champion, called "The Frank Volpe Award." One of his female players, Laura Enriquez, recently authored a book about her experience playing for Frank entitled "Demons" (the nickname of the St. Mary's football team). Frank also coached basketball and baseball at St. Mary's and served for many years as a board member of the St. Mary's Sports Club. As someone once remarked: "Initially you see Frank as this gruff, kinda scary guy, but after you know him, you realize he is just a big cuddly teddy bear!" He will be sorely missed by his family and friends, including dozens of coaches and hundreds of players. The family hopes to have a Celebration of Life event later this year.
Published by Suburban Life Publications from Sep. 17 to Sep. 30, 2021.
To plant trees in memory, please visit the Sympathy Store.
MEMORIAL EVENTS
To offer your sympathy during this difficult time, you can now have memorial trees planted in a National Forest in memory of your loved one.
MAKE A DONATION
MEMORIES & CONDOLENCES
3 Entries
Frank was a wonderful friend and co-worker for many years at the CBOE. May our Lord Jesus Christ be with him now and forever as he enjoys eternal life with God. Bless you always Frank.
Greg Meronek
Work
October 16, 2021
Prayers for the Volpe Family Frank made me laugh quite often in our many years at CBOE. Rest In Peace...
Jack Cusack
October 10, 2021
Our son , Tim, was coached by Frank on the St Mary´s football team 30+ years ago. We still remember those games & practices. Kids & parents had so much respect for Frank. He will be missed but will always think of him watching younger kids play football.
Joan & John Shannon
School
September 21, 2021
Showing 1 - 3 of 3 results