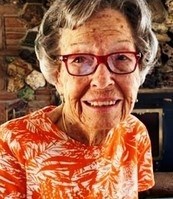 BORN
1918
DIED
2021
Eleanor F. Fralick
Born: March 18, 1918
Died: October 15, 2021
Eleanor (Foreman) Fralick, passed away at the age of 103 on October 15, 2021, in Highlands Ranch, CO. Eleanor was born in Grand Island, Nebraska on March 18, 1918, to Chester A. and Ruby Risser Foreman. She grew up in Wichita, KS, attended Carlton College in Northfield, Minnesota and graduated from the University of Wisconsin in Madison, WI in 1940 with a B.A. in Social Work. After college, Eleanor worked for two years with young children and youth at Madison Neighborhood House. Eleanor met Clarence L Fralick, a mechanical engineering student at the University of Wisconsin, on a blind date. They were married on October 7, 1942.
Eleanor and Clarence moved to Elmhurst, IL in 1951, where they raised their family and were active in the community. They were among the founding members of the Elmhurst Presbyterian Church and Eleanor sang in the church choir for many years. Eleanor was a member of P.E.O., an international philanthropic educational organization for women. After her children left home, she worked part-time in the language lab at Elmhurst College. She and Clarence enjoyed traveling around the United States and abroad. Clarence passed away in 1994. Eleanor continued to travel with friends and family. She particularly enjoyed spending the month of March in Maui, where she made long-lasting friends. In 1999, Eleanor moved from Elmhurst to the Oak Brook Club in Oak Brook, IL. In 2015, she moved to Wind Crest, a retirement community in Highlands Ranch, CO to be closer to her daughters.
She is survived by her three children, Charles L. Fralick (Karlyn) of Pleasanton, CA, Martha Fralick of Littleton, CO, and Susan Fralick (Hank Rutter) of Telluride, CO; three grandchildren, Kendell Fralick Anderson (Greg), Chicago, IL, Katherine K. Bowman (Gordon Clark), Denver, CO and Andrew Scott Bowman (Jasmine), Seattle, WA; and six great-grandchildren, London and Charlie Anderson, Avery and Edison Bowman, and Bill and Teddy Clark.
The family plans to hold a private memorial service to honor Eleanor's long and fulfilling life. Those who wish may donate in Eleanor's name to the Elmhurst Presbyterian Church, 367 Spring Road, Elmhurst, IL 60126 or the Wind Crest Student Scholarship Fund, Attn: Philanthropy, 3255 Mill Vista Road, Highlands Ranch, CO 80129.
Published by Suburban Life Publications from Nov. 2 to Nov. 5, 2021.
To plant trees in memory, please visit the Sympathy Store.
MEMORIAL EVENTS
To offer your sympathy during this difficult time, you can now have memorial trees planted in a National Forest in memory of your loved one.
MAKE A DONATION
MEMORIES & CONDOLENCES
3 Entries
Eleanor was lovely person, a lifelong friend and delightful neighbor at the Oak Brook Club. Thoughts and prayers to her family.
Lee Strouse
Friend
November 6, 2021
We were saddened by the passing of Eleanor, We knew her and Clare since 1968 when we joined the Elmhurst Presbyterian Church. Also we were close friends as we lived down the hall from her unit at the Oak Brook Club since 2008. We send our condolences to the family. We will miss her. Ron & Ginny Nelson
Ronald Nelson
Friend
November 6, 2021
So sorry to find out Eleanor died but she had a very long and full life. Have many wonderful memories of her from Adult Studies and choir. She assigned me my choir robe and helped me with pinning on my corsage on Christmas Cantata Sundays. Of course she also went back many years with my late parents, both in Elmhurst and Oak Park. My deepest sympathies to all of her family.
Susan Leslie
Friend
November 5, 2021
Showing 1 - 3 of 3 results