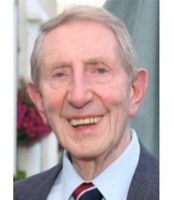 BORN
1929
DIED
2021
Alexander Whyte Mitchell
Born: December 29, 1929
Died: October 14, 2021
Alexander Whyte Mitchell "Eck", age 91, passed away of natural causes in Downers Grove, Illinois on October 14, 2021. He was born in Arbroath, Scotland on December 29, 1929 to the late Alexander Whyte Mitchell and Elizabeth nee Shepherd. He attended Parkhouse and Abbey Schools, and Arbroath High School. He followed other family members to the harbor where he worked for Gerard Bros. as a master joiner building the interiors of fishing boats. He was a member of the St. Thomas swim team. He served as an M.P. in the Royal Air Force between 1951 and 1953. He made many lifelong friends in his hometown and in the RAF.
In 1964 he immigrated to the United States, settling first in Naperville, Illinois near his uncle Graham Shepherd and cousin James Stewart. He worked at Kroehler Manufacturing and later Moser Lumber. Alex had a great love for precision woodworking and was known for his meticulously hand-crafted projects. He was a long-time member of the Euclid Masonic Lodge becoming a Master Mason in 1984.
He met Patricia Walker in 1974, and they remained devoted life partners until her untimely death in 1991. He was a loving father to her daughters Eileen (David Lackland), Diana (James Smith) and Sharon Walker, a friend to Patricia's son Steve Walker, an adoring grandfather to three and a great grandfather to two.
In addition, Alex is survived by his cousins James Stewart and family, Robert Smith and family and Kathleen Cargill nee Stewart and family, RAF mate John Rayner, swimming mates from Canada to Australia, other loving cousins and friends. Everyone who knew him recognized how kind and thoughtful he was and will cherish his memory.
A private Celebration of Life ceremony was held on November 14th in Downers Grove. A service and celebration will be held in Arbroath for our dear Alex in 2022.
Published by Suburban Life Publications from Dec. 14 to Dec. 16, 2021.
To plant trees in memory, please visit the Sympathy Store.
MEMORIAL EVENTS
To offer your sympathy during this difficult time, you can now have memorial trees planted in a National Forest in memory of your loved one.
MAKE A DONATION
MEMORIES & CONDOLENCES
0 Entries
Be the first to post a memory or condolences.